Last night, the time when music was still music was remembered.

Following the festive International Thanksgiving of the Members Church of God International (MCGI) last March 28-30 was an evening of celebration of meaningful songs from the last decades. Entitled Remember When, this charity concert brought together thousands of congregants at the MCGI Headquarters in Apalit, Pampanga and at other more chapters all around the globe.

As early as 6 p.m. (Philippine time), the ecstatic mood was already set as MCGI-grown talents staged thrilling musical performances. This atmosphere continued to escalate as local artists Hammilan Pavoreal and Lilibeth Garcia rendered their versions of “Memory”, “I Don’t Want to Miss a Thing”,  and “If Ever You’re in my Arms Again.”

Rey Valera, a renowned Filipino hitmaker, sent the audience into bursts of laughter as he narrated comic anecdotes about his career as an artist. The crowd sang with him as he crooned his classic hits “Naaalala Ka”, “Maging Sino Ka Man”, and “Kung Kailangan Mo Ako”.

The almost two-hour performance of The Platters, a very successful vocal group from the 50s, was one of the highlights of the event. They shared their passion for music with the audience as they sang their chart-topping hits like “Only You”, “The Great Pretender”, “Harbor Lights”, “He’s Mine”, and “Twilight Time”.

And who would forget the remarkable moments of delight during their act? A rendition of “Smoke Gets in Your Eyes” together with the Presiding Minister to MCGI, Bro. Eli Soriano. A lady invited to be with them on the stage and then serenaded with the sweet song “My Prayer”. A member of group, then wearing a genuine smile, wholeheartedly gave red roses to some lucky ladies. All these added splendor to the evening.

The ambiance was at its best, yet the night was still young.

Soon after Kuya Daniel Razon went on stage, he led the crowd in singing a birthday song for Bro. Eli Soriano. The international evangelist will be celebrating his 49th birthday in spirit on April 7, a commemoration of the day when he was baptized in the Church. A set of standard songs–“Diana” , “I Left My Heart in San Francisco”, “What Kind of Fool Am I”, “Together Again,” and “Mr. Lonely” to name a few–performed by Kuya Daniel followed the gracious greeting of the congregants to Bro. Eli. 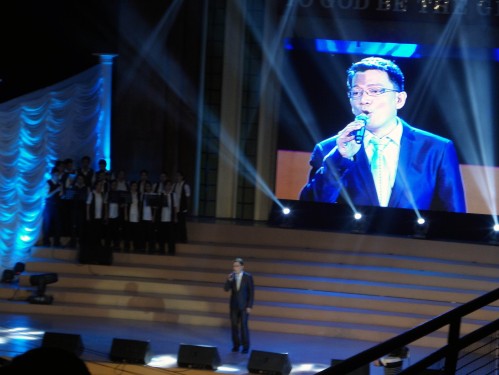 Carrying on the remembrance of the music from the past, Bro. Eli lent his voice singing heartwarming songs with “Through the Years” being one of the most sentimental and moving.

He also cited verses and shared wisdom to complete last night’s wonderful concert. He said that the proceeds of the event will go to the construction of a convention center in Metro Manila that will be used as an avenue to centralize the charitable works of the Church. He further explained that in the course of doing this endeavor, there will always be hindrances. He then firmly uttered, “Let us be vigilant. Let us be watchful.”

The rest of his loving reminder he expressed through tearfully singing “Walk with Faith in Your Heart”— a sight that for sure has lingered in everyone’s heart.  The evening ended with the yesteryear’s music relived, and the ardent faith of the believers edified.